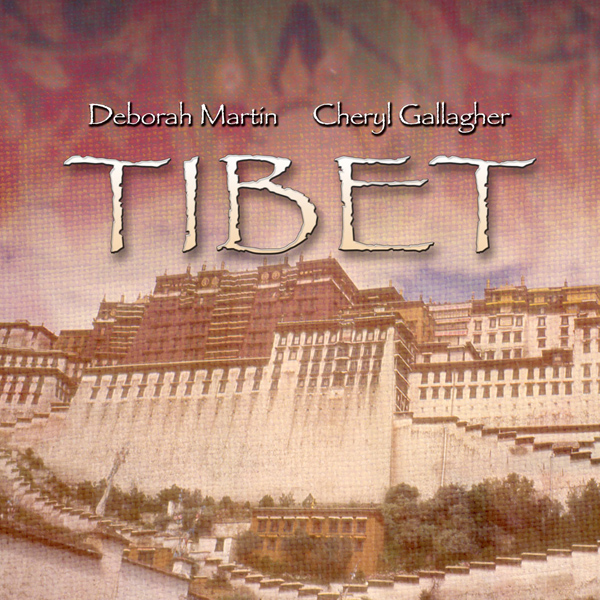 “We took a trip through Tibet to experience, first hand, the majesty, beauty and spirit of the “Land above the clouds” Our hope is that these musical impressions will take you, the listener, on the same journey that we experienced.”
– Deborah Martin & Cheryl Gallagher

Tibet is a richly textured and highly emotive musical sojourn that takes the listener on a journey to the land above the clouds (as Tibet is known). Perfect for meditation, contemplation, deep listening and spiritual thought and practice. Deborah Martin and Cheryl Gallagher have composed a work of beauty and majesty mixing traditional tibetan percussion and taos drums, harps and electronics with samples of authentic tibetan prayers intoned by residents of this ruggedly awe inspiring country.

Ambient musician Deborah Martin and harpist Cheryl Gallagher traveled to Tibet several years ago. This album musically conveys their impressions, reactions, and remembrances of that trip, which obviously was one of deep personal significance and profound impact. As such, judging it critically (in a straightforward review) is inadequate. A project this personal and intimate simply cannot be properly evaluated by the usual analytical methods. However, for the sake of communicating my thoughts on the recording, I have to offer some kind of commentary on it. But, I wish to emphasize that I cannot put my statements in any accurate context, except as a listener.
Martin (keyboards, samples, Tibetan bells, bowls, drums, assorted percussion, and conch shell) and Gallagher (Camac electric harp, electronics, samples, and percussion) are joined on several tracks by the ‘usual suspects’ from Spotted Peccary on assorted other instruments, i.e. Howard Givens, David Helpling, Mark Rownd and Mark Hunton.

The music on Tibet covers a wide range of moods, varying from powerfully dramatic to ethereal and drifting. Owing to the presence of ethnic percussion and some Tibetan musical motifs, as well as recorded sounds of monks, nuns, and sherpas, if I had to classify this, I would call it a hybrid of ambient, world, and new age (as much as I’m confident that Martin and Gallagher may dislike my using that term). However, it’s hard to deny the spirituality inherent in this music, as well as characteristics of the music itself when it crosses over into gentle warm melodicism wedded to ethno-tribal beats. An example would be ‘Glacier’ which mixes undulating waves of synths, Taos drums, sparse harp, and other percussion to weave a mysterious, haunting spell that conveys a sense of grandeur without a trace of bombast (no small feat, that).

‘Morning in Tibet’ opens with bells and the singing of Tibetan nuns, amidst swelling electronic textures and synth chorales. The music’s expansive nature depicts what (I imagine) it would be like to greet the day from ‘the ceiling of the world.’ High-pitched whistling keyboards and lower register drones intermix forming an awesome ‘whole’ that helps you visualize the glow in the eastern sky getting brighter and warmer. The track builds with the addition of rhythmic EM elements (classic new age keyboards, such as twinkling bell tones).

There are eight tracks on Tibet, and their variety ‘feels’ as if you are joining Gallagher and Martin on a ‘mental’ return trip to the country. While much of the music is decidedly ambient in structure and essence (such as the spacemusic-like ‘Essence’ with its gently flowing and then soaring and exultant keyboards), I think that labeling it such actually sells the album short. Which is not to infer that ambient music is lacking, but rather that Tibet has something decidely more impactful contained in its digital grooves. It hits you, for example, on ‘Seeker and Sought’ when Gallagher’s beautiful harp playing eases in on top of the underlying washes of synths and textures, joined by angelic synth chorales, morphing into a powerful synthesis of the two with additional thundering drumming and percussion. Actually, one other recording that this reminded me of was the vastly under-appreciated Asia Voyage by Jon Mark (not coincidentally also inspired by that musician’s travels, this time to the Far East). Both albums share an ambient aesthetic, but draped in some world fusion and new age accouterments. A track like ‘Eklabati’ with its myriad mysterious ethnic percussion, dark ambient undercurrents, and subterranean (!!!) textures, might seem out of place amidst the more ethereal tracks, but it flows almost seamlessly in among the other songs, since Tibet is truly a musical voyage. The presence of dramatic synth strings (sounding much like those used on Jon Jenkins’ and Paul Lackey’s fantastic album Continuum) transitions the song from the underground and elevates it into the atmosphere, almost as if we were flying above the clouds, especially when flute samples and Taos drums are also added to the mix.
The album concludes with ‘Procession’ (the longest track at ten-plus minutes). The sound of wind intermingles with lush keyboards and the cries of wildlife (I believe it’s the apes that are indigenous to that part of the world, but I could be wrong…remember the ones in the opening to the movie Baraka?). There is a simple yet majestic feeling at work here (Mark Hunton contributes flute to the song, as well). Field recordings of sherpas and the clanging bells of some sort of pack animals used on the trails, I suspect, as well as chanting excerpts, coalesce with the music, no doubt serving as a conduit for Gallagher and Martin (and open-minded listeners) to be transported right there amidst the mountains and the people and the deep spirituality that permeates everything. The penetrating call of a conch shell collides with an assortment of bells, cymbals, drums and the resulting cacophony is actually a musical celebration of the sheer power of the locale, as if the musical elements were bringing all the energy into focus, like sunlight through a magnifying glass. The song slowly unwinds almost as if we were reaching the end of the journey itself, which in some ways, we are.

As I wrote above, literal descriptions of Tibet might better portray what you would actually ‘hear’ on the CD, but I simply cannot listen to a recording this heartfelt and personal and not have a deeper reaction than simply ‘hey, this is pretty good.’ It is more than ‘pretty good,’ but it’s also not for everyone, obviously. Ambient purists need to be aware of the presence of drumming, chanting, and field recordings, as well as some new age music textures (mostly, a warmer than usual musicality than is found on ambient recordings). Somehow, I don’t think Martin and Gallgher are overly concerned with how many people ‘get’ this album, but I hope there are those out there who will appreciate it nonetheless. However, regardless of how many people hear it and/or enjoy it, Tibet stands as a singular achievement and a testament to Martin’s and Gallegher’s dedication for preserving their memories of a very special time in their lives and passing those impressions along to us.

Multi-instrumentalist Deborah Martin and world class harpist Cheryl Gallagher made a trip to Tibet in 1999 in search of the spiritual and musical heart of the land, its culture and landscape.
The impressive outcome is ‘Tibet’, which is a celebration of various ancient Tibetan percussion, religious prayers, harp, samples and synthesizers, all creating a timeless atmosphere.

Especially the grand opener ‘Palace’ and ‘Glacier’ take you to higher realms, both rich of impact and sounds. Those looking for wideness and intimacy in electronic music will find it here.

All eight compositions are delicate atmospheric sketches which can be used for reflection and introspection. I’m sure fans of the work of David Parsons will love this album.

In addition, the sound and mastering of the CD are outstanding.

‘Tibet’ is a timeless resonating sonic journey which I like to recommend very much!

Sensibility, majesty and warmth would perhaps be the most adequate words to refer to this work. Deborah Martin and Cheryl Gallagher offer us an excellent sample of what they are capable of doing. The artists fuse Melodic Ambient and New Instrumental Music, with certain touches of World Music with a Tibetan flavor. The result is a precious collection of melodies with a romantic air, sometimes happy, sometimes melancholy, not lacking in some occasions a suggestive aura of mystery.